Government-owned entity
Accountable to the public

Invests only in projects that advance community and environmental aims

Partners with not-for-profit banks in NSW, providing them with cheaper and easier access to funding

Reinvests profits back into the community
Funds community projects

Government-owned entity
Accountable to the public

Reinvests profits back into the community
Funds community projects

Invests only in projects that advance community and environmental aims

Partners with not-for-profit banks in NSW, providing them with cheaper and easier access to funding

Environmental destruction is driven by government obsession with economic growth, which in turn is driven largely by the financial system. Reforming the financial system is a necessary step towards creating a new sustainable economy, one in which humanity can live within its ecological bounds while improving quality of life for all.

Policy-makers are stifled in reforming a financial system in which banks are almost entirely privately owned. Creating a public bank will add much-needed diversity to the banking options available in NSW, assist in meeting immediate community needs and also help us to address the big challenges of our time, like climate change.

By democratising basic financial services and investment decisions made with our money, we can ensure that our collective wealth is used to benefit us today as well as building the future we want to see tomorrow.

Unlike Australia’s existing banks, the Public Bank of NSW will be obliged to pursue certain social and environmental outcomes. This will ensure our money is not just well-looked after, but actively contributing to a better world. This will include:

How would it work?

Every person in NSW will be entitled to open a fee-free deposit account with The Public Bank. This will help to streamline payments from the State government, particularly during a crisis.

The Public Bank will also help individuals in NSW with low interest rate loans. This will ensure more equitable access to funding as we rebuild the economy post-COVID, particularly for small businesses and sole operators.

The Public Bank will also partner with NSW-based not-for-profit banks and will support local government by issuing loans to local councils at low interest rates.

Best of all, the Public Bank will also help us finance a Universal Wellbeing Payment.

How would we do it?

Legislation to establish NSW’s public bank will require the majority of NSW’s financial assets (estimated at around $150bn), along with all cash and financial assets of Councils (conservatively estimated at $10bn), to be deposited in the Public Bank. In turn, the Bank will pay all dividends to the State of NSW, helping to ensure a healthy State budget.

The Public Bank would be directly accountable to the Parliament of NSW, not to the Government, and it would have a member-elected Board with a variety of representatives, including worker, union and local council representatives. This will ensure that, no matter the government of the day, the Public Bank of NSW is run for the people.

Reforming our financial system is a necessary step towards creating a more democratic and sustainable economy.

The problem: money for more money

There is nothing wrong with debt or credit. Allocating money to socially useful activities will usually involve lending of some sort. However, two big problems arise when the lending is done for profit by undemocratic, private institutions.

One problem is that lenders have more of an interest in simply expanding the level of debt so they can make more profit. They become less concerned that the money is allocated to useful activities, or is allocated efficiently.

A second problem is that, as in any profit-driven sector, the lending sector will tend towards oligopoly. The concentrated power of a handful of banks gives them a licence to act with virtual immunity. Indeed, the Royal Commission laid out that the big banks have systematically stolen from the community and have since escaped any meaningful punishment.

Private debt, such as mortgages, has sky-rocketed to compensate for decades of austerity. This has meant massive profits for the big banks through fees and interest. The risk of debts has also been transferred away from the public as a collective, towards individuals and households. 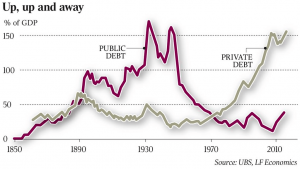 This has played out most obviously in housing. Debt-financing private housing is the tip of the spear – shelter is a fundamental need, and a mortgage is by far the biggest debt most people will ever incur. People are practically forced to take on a huge debt and deal with that risk themselves.

Figures from the Australian Bureau of Statistics shows the average mortgage on an owner-occupied dwelling in NSW grew by 20.5% through 2021 to hit an all-time high of $779,770.

Given the typical dwelling price in Sydney of $1.3 million, and assuming the mortgage holder can stump up the 20% deposit, they will be paying around $500m in interest over a 25-year loan.

We commonly hear that housing remains affordable because of relatively low interest rates. However, wage growth is a key factor in affordability. Looking at the size of debts and wage growth, as well as interest rates, gives a better picture of affordability. Using this measure, this graph shows housing in Australia is the most expensive it has ever been.

The twin problems of profit-driven lending and concentrated power come together in mortgages. The Big Four banks control over 80% of home loans in Australia. With that kind of power, the big banks can do pretty much whatever they want.

The big banks have too much power over our communities. They have too much control over our housing, over small businesses, and over what infrastructure gets built. By seeking out whatever will make them a profit, rather than what is beneficial for society, the big commercial banks can never be what we need them to be.

With quickly rising inequality and a climate crisis that demands immediate action, we can’t hope that the private sector will turn itself around.

It’s time to take that power back with our own Public Bank.

Public banks are run successfully all over the world. In fact, there used to be a public bank in NSW until it was corporatised and sold off. Progressive community-minded public banking is gaining traction worldwide in the aftermath of the global financial crisis.

Adapted from the Public Banking Institute

Public and community-owned banks in Australia and overseas

Commonwealth Bank of Australia (until 1991)

WANT TO GET INVOLVED?

Join our campaign for a Public Bank of NSW today, and help us ensure a future for all of us.

Have you seen our campaign for a Universal Wellbeing Payment? The UWP is a basic income for everyone — no means testing, no bureaucrracy, no strings attached. It means you will always have what you need to live a good life, no matter what. Help make it happen.

Check out the UWP campaign

The Greens acknowledge the Traditional Owners of country throughout Australia and recognise their continuing connection to land, waters and culture. We acknowledge that these lands were stolen and sovereignty was never ceded. We pay our respects to Elders past, present and emerging.